Review of the educational set: Practical Guide to Electronics (TME-EDU-KITBOOK-1)

We have received for review the Practical Guide to Electronics educational set sponsored by TME Education.

The set was delivered in an aesthetic cardboard box. Inside you will find a book: The Practical Guide to Electronic Circuits and a collection of electronic components supplemented by a few practical accessories.

The book included in the set is a practical guide to the world of electronics. It is a very strong element of the set, in our opinion, deciding about its future educational success. At the beginning of the book we will find a detailed list of the contents of the box, a table of graphic symbols used in electronic schematics and a few short tips to make it easier to start working with the supplied set. The main topics discussed here are how to use the contact boards and some basic information about electronic circuits. The remaining part of the book is divided into 6 numbered chapters, in which the theory is supplemented with a set of exercises.

The first chapter deals with issues related to energy sources. In the theoretical introduction, several sources of electricity are presented - from power plants to batteries and accumulators. In the practical part we will find 4 exercises related to different ways of obtaining electric current: by means of chemical reaction, solar energy and mechanical work.

The second chapter is devoted to resistors. It discusses the basic properties of resistors, both fixed and variable, such as potentiometers, thermistors and photoresistors. The theory is translated into practice through 9 exercises discussing the following issues:
• serial, parallel and mixed resistor connections;
• the use of a resistor as a current limiter in a circuit;
• -voltage dividers;
• -thermistor;
• photoresistor.

The theoretical, third chapter three is devoted to capacitors. The fourth chapter discusses various types of switches - from simple momentary switches to various types of switches and relays. The theory is illustrated by 8 practical exercises. The fifth chapter is devoted to semiconductor components such as diodes and transistors. Theoretical issues were presented in 10 practical exercises. The first four exercises concern the polarity of the rectifier diodes and the Zener diodes. Four others present examples of analogue systems based on NPN and PNP bipolar transistors. In the last two exercises the nMOSFET field-effect transistor was used. The last, sixth chapter concerns optoelectronic devices. It discusses single-color LEDs and LED sets such as RGB LEDs and seven-segment displays. In addition, elements such as a photodiode, phototransistor and optical coupler (optocoupler) are presented. The theory is illustrated with 12 exercises.

The entire handbook is written in a very accessible way, using simple, understandable language. We consider the selection of theoretical content and practical exercises to be very good. After reading the handbook once, we noticed two minor shortcomings. The first one is factual. In figure 5.7 (page 172), the diagram of voltage after the rectifier diode goes through zero. The second problem concerns a slight inconsistency in the numbering of exercises in chapter 6. In the remaining chapters each practical exercise is a numbered subchapter of the second level, while the last two exercises of chapter 6 are secondary subchapters. This is a difficulty for those who run the classes and do not need to read the theoretical introduction to each exercise.

Apart from the handbook discussed above, the box contains electronic elements and additional components required to perform the exercises described in the handbook. These are:
• multimeter;
• two breadboards;
• connection wires to the prototype boards;
• box of rigid insulated and non-insulated jumpers;
• switching-mode 9V AC power supply unit with an adapter for breadboards;
• photovoltaic cell;
• DC crank generator;
• set of resistors and potentiometers;
• set of connectors (including a relay);
• set of capacitors;
• set of semiconductors (diodes and transistors);
• set of optoelectronic devices (LEDs, seven-segment display, photodiode, phototransistor, optocoupler);
• a set of sound transducers (microphone, loudspeaker and piezoelectric transducer);
• electric motor;
• set of cables terminated with alligator clamps;
• electric motor with a propeller;
• set of galvanized screws and copper plates for building cells.

The entire set consists of 62 elements, with the electronics components and most accessories packed in separate zip bags. Each bag has a sticker with an electronic symbol, the name of the element and the number of pieces in the bag. Depending on the type of element, there are between 1 and 10 pieces in the bag. Clear symbols make it easier to find the elements needed to perform the exercise, and the bags themselves allow you to maintain order during the classes and after their completion. Of course, with the help of the supplied elements and accessories you can perform all the exercises from the handbook.

The layouts described in the manual do not, of course, exhaust all the possibilities offered by this educational set. After building the systems from the handbook you can experiment further by building other electronic systems, hundreds of which are described in the Internet.

A strong point of the set is the included switched-mode DC power supply unit with a nominal output voltage of 9 V and a maximum current of 1 A. It is resistant to faulty connection in the circuit. It has passed the 5-minute short circuit test, after which it is still operational. An unloaded power supply unit generates a steady voltage of 9.26 V. With a 0.9 A current load, the output voltage drops slightly to 8.92 V. At constant load the output voltage is very steady and the under or over voltages do not exceed several dozen millivolts. The problem occurs when the load is subject to a downward step change – in such a situation, the overvoltage may exceed 20 V. 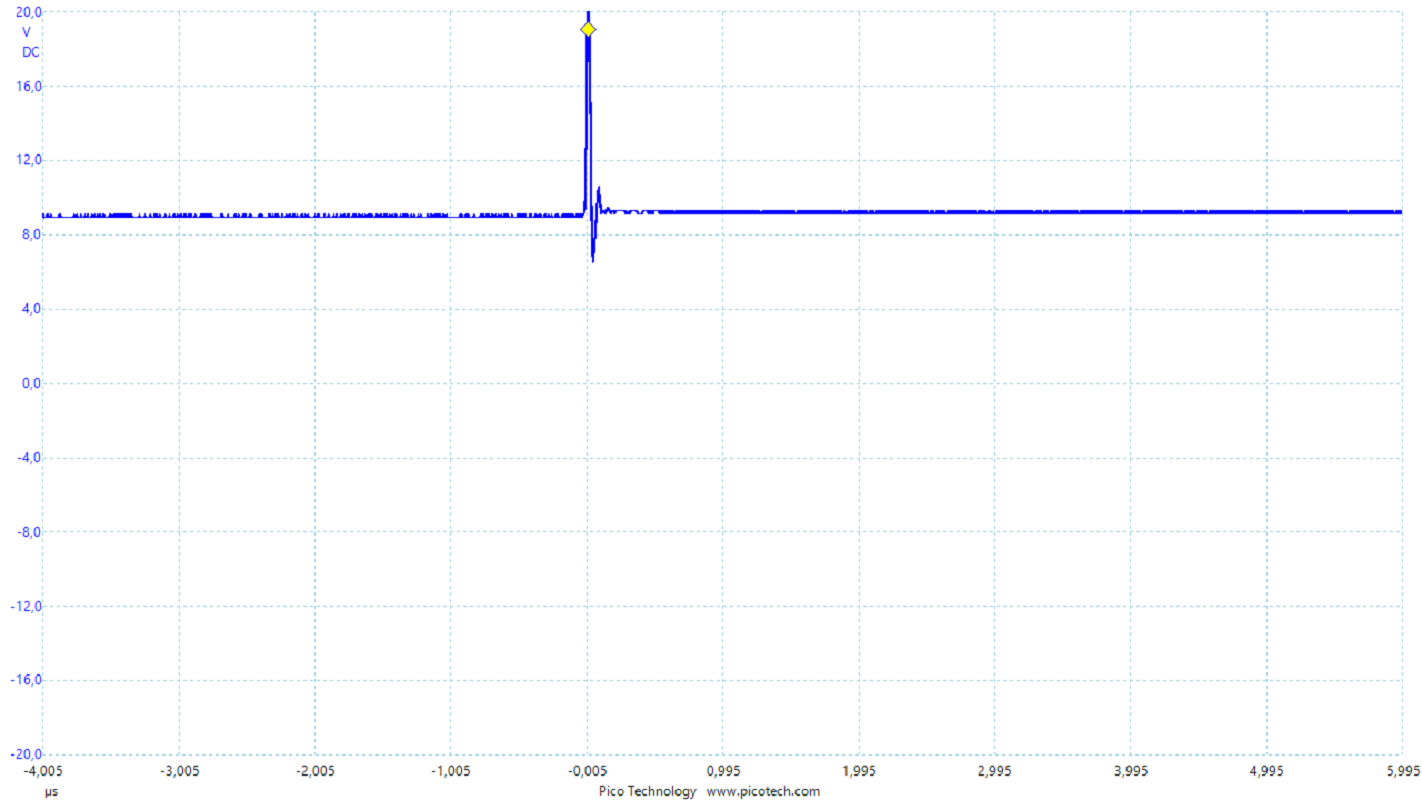 Fig. 7 Inverter over and under voltages measured after load change from 0.9 A to 0.1 A

This type of overvoltage was the reason for blowing several nMOSFET transistors used in the touch switch circuit when the circuit was powered by the power supply unit. A very useful element for creating clear and aesthetic circuits on the breadboard are insulated rigid jumpers of various lengths.

A box with such jumpers is included in this set. However, there are no jumpers allowing direct connection of upper and lower power supply rails on the breadboard. While performing particular exercises from the set, we came across a few minor drawbacks, which can be removed in the next edition of the set. The set lacks a base for the engine, such as the one shown in fig. 6. The lack of a base makes the attached engine "dance" around the table making it difficult to perform the exercise. Another drawback is the lack of a few simple tools and accessories in the set. The most useful would be:

The vast majority of electronic components and accessories can be easily connected to the breadboard. The exception to this is the monostable switch, which requires the terminals to be straightened out - flat pliers would be useful. However, even after straightening the terminals, it is the element whose contact with the breadboard is the least reliable. 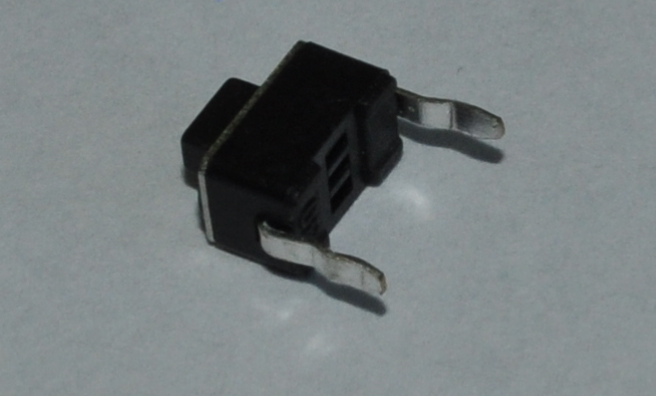 Fig. 10 The momentary monostable switch is difficult to place on the breadboard.

However, the small disadvantages mentioned above do not make it difficult to perform the exercises described in the handbook and to learn the secrets of electronics. To sum up: the educational kit available for testing is a very interesting proposition addressed to electronics enthusiasts. It can be additional equipment in the physical laboratory in primary and secondary schools. On its basis you can propose a number of courses from the basics of electronics. It can also be a great gift for young people interested in electronics. We strongly support the development of this product and suggest translating the handbook into Polish. 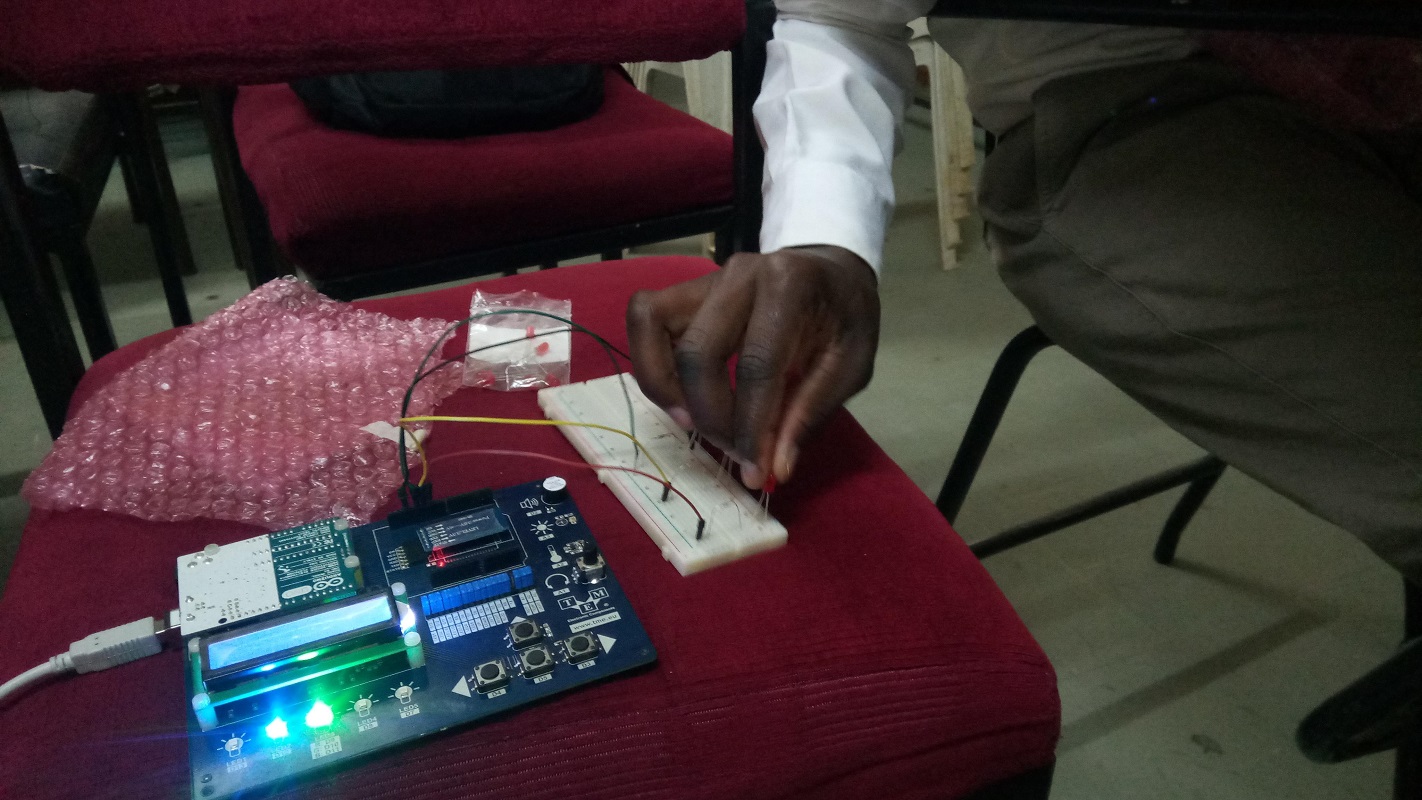